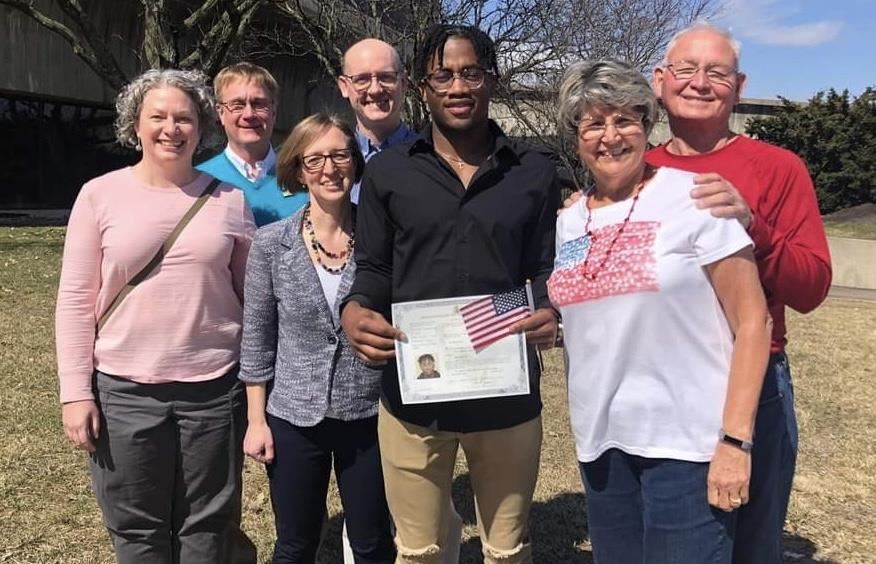 March 28, 2022 -- In just a couple of months, seniors across Columbus City Schools will celebrate graduation -- a significant accomplishment and the beginning of a new era. But, for one Centennial High School senior, the celebrations came early. March 15, 2022 is a day Alvin Forte won’t forget. It was the day he became a United States citizen. The road, however, wasn’t an easy one.

Forte, the son of two Liberian natives who fled the war-torn country, was born in Ghana in 2003. When he was just six months old, his father left for Australia, while he and his mother came to the United States on refugee status. They settled in Pennsylvania with aspirations of starting a new life. Things were going well, but unfortunately they did not last. Forte’s mother grew ill and passed away when he was 11 years old.

Forte’s father came to the U.S. with hopes of taking him to Australia. When initiating the paperwork for travel documents, he learned that his mother never became a citizen. This meant Forte was still on refugee status, and traveling to another country would be difficult.

Tension grew between his biological father in Australia and his mother’s friends in the United States. There was constant relocation. He lived in Florida, Maryland, and Virginia before his father brought him to Ohio in 2018.

“Initially, I just kept to myself,” Forte said. “I had moved so much already, so I figured I wouldn’t be here long.”

He and his father began attending Bethel International United Methodist Church. When his father’s visa was reaching expiration, church members stepped up. Harry and Kathy Young, then Jeff Heindrichs and Laura Schnebelen several months later, agreed to take him in while they continued to work on getting him to Australia to join his father.

After multiple failed attempts, the final effort left Forte stranded in California, unable to board a plane to Melbourne. He returned to Columbus, and the church team tried to figure out what went wrong. They learned that Forte’s biological father had cut corners in the immigration process that would have put him at serious risk if he had entered Australia.

“At that point, we knew Alvin couldn't leave the States until we were sure he could arrive and stay in Australia safely or have a country where he could return,” said Schnebelen, who happens to be one of CCS’ own -- the principal at John Burroughs Elementary School. “Alvin needed a home until we could make that happen.”

In September of Forte’s sophomore year, Jeff Heindrichs and Laura Schnebelen sat him down to explain his two options.  He could move in with them and continue at Centennial until he was granted permanent residency status in Australia, or move in with them, graduate from Centennial and become a U.S. citizen. He chose citizenship.

“During our Summer Reading Program, we invite CCS middle and high school students to serve as classroom volunteers and reading buddies. To help fill his summer, I suggested that he serve a week as a reading buddy,” Schnebelen said. “He volunteered for the entire program and was so good with our students. Watching him interact with our students changed my thinking from ‘He's a nice, quiet kid who Ben (my son) knows from youth group’ to ‘Wow, he's really special!’”

Although Forte faced many challenges, defeat was never an option. He spent the next couple of years working hard, maintaining a 3.4-grade point average while playing football, wrestling, and running track. Then, at 17, he began studying for the Naturalization Civics Test, a requirement for citizenship by naturalization. His drive and determination did not go unnoticed.

“Alvin sees what he wants, and he goes for it. He takes intellectual risks and grabs ahold of opportunities around him. That's rare for someone his age,” said English teacher Sarah Barry, who taught Forte his sophomore year. “It’s especially noteworthy when you consider the challenges he has faced. He took those challenges and used them as a source of strength.”

On March 15, his hard work paid off, and his desire to become a U.S. citizen came to fruition. Finally, seven years of uncertainty since his mother’s passing ended.

“It was a long road to get here, but I wouldn’t change that even if I could,” Forte said. “Every challenge helped mold me into who I am today, and I know my mom would be so proud.”

With so much to celebrate already, there’s more to come for this bright young man. After high school graduation, he will transition from a Centennial Star to an Ohio University Bobcat. Forte’s tuition is paid for with multiple scholarships and grants, and he has been accepted into the Athletic Training Master's program. But, for now, he is right where he wants to be -- Alvin Forte is home.