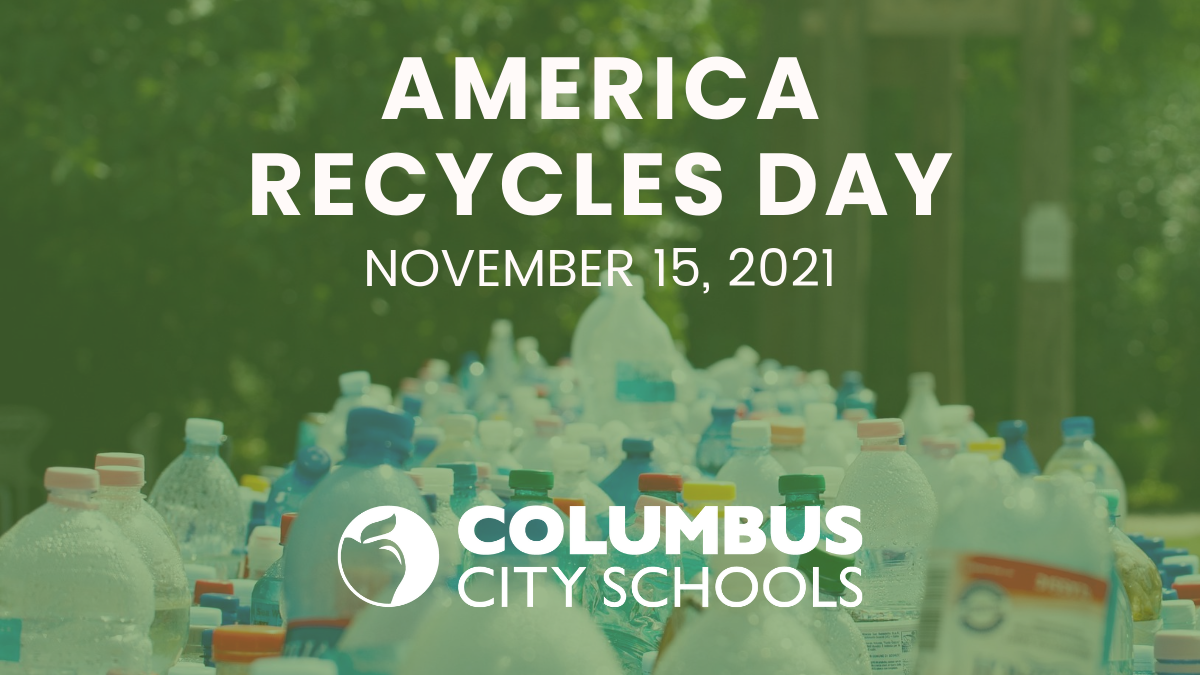 November 15, 2021 -- The Superintendent and CEO of Columbus City Schools (CCS), the largest public school district in Ohio, is leading by example when it comes to sustainability and teaching young people the importance of recycling and reusing. For Superintendent, Dr. Talisa Dixon, the lessons go beyond the classroom.

“Being good environmental stewards is not something we talk about; we practice it,” said Columbus City Schools Superintendent/CEO Dr. Talisa Dixon. “Living through a pandemic reinforced the importance of sustainability and protecting our valuable resources.”

Every week, Columbus City Schools serves more than 47,500 breakfast meals and 92,500 lunches which is one of the reasons recycling and sustainability are priorities for the District’s Food Service team. For the last ten years, CCS has partnered with the Solid Waste Authority of Central Ohio (SWACO) on several initiatives including the implementation of a green team of students who become “leaders for change at their schools.”

These groups ensure recycling and composting lunch scraps and implementation of a refuse sorting system inside the cafeteria. In 2020, Indianola Informal K-8 was the first Columbus City School designated as a GreenSpot award winner by City of Columbus Mayor Andrew Ginther. A GreenSpot school award takes steps to educate students and staff about sustainability, recycling, and green transportation, and how these efforts create a positive impact on their neighborhoods.

Indianola K-8 was especially highlighted for its work in engaging students on litter cleanups, food gardens, composting, recycling, and water conservation. Another school within Columbus City Schools is also working towards that same environmental certification that Indianola K-8 received.

Funding from SWACO has also provided water bottling filling stations in 23 school buildings to reduce the dependency and impact of single-use water bottles being thrown away after one use.

“We will have lesson plans for teachers to utilize in the classrooms to educate our youngest students on the importance of saving our planet,” said Christine Weatherholtz, Farm to School/Nutrition Educator at Columbus City Schools. “These refillable water stations are one more piece of the sustainability puzzle of educating our students on how to be environmental champions.”

The other puzzle piece includes a Teen Eco Summit with the Columbus Zoo and Aquarium planned for November 2021. Students in grades 10 - 12 will focus on sustainable foods, plastic reduction, energy use, composting, and habitat restoration.

Columbus City Schools owns 50 acres of land where it operates the Spruce Run Environmental Education Center, a unique place for environmental studies and outdoor learning. At Spruce Run, after lunch, all waste is placed in proper recycling containers. Milk cartons are reused as seed starter containers, and the uneaten fresh fruits and vegetables are left in an open field for wildlife or placed in composting bins.

In 2017, Columbus City Schools received a Community Block Grant to focus on recycling and environmental education. The District developed lesson plans and provided the book Michael Recycle by Ellie Bethel for every third grade student in all 75 elementary schools. In 2019, the environmental adventure was extended to include a second book for every third grade student, titled Michael Recycle Meets Litterbug Doug also written by Ellie Bethel.

To reduce the amount of paper waste, Columbus City Schools partners with an online electronic platform called Peachjar, which has significantly cut down on the number of hand-outs and fliers for parents that often end up at the bottom of many backpacks. Peachjar has saved Columbus City Schools from printing roughly 37 million sheets of paper… which is about 4,500 fewer trees.

Building and Grounds maintain the District's 134 school buildings and support facilities. Building and Grounds recycles scrap metal, to reduce what ends up in the landfill. The Department also reuses capital equipment and has switched to mercury-free lighting sources, which has reduced the school district’s use of hazardous chemicals.